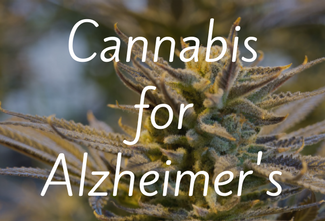 Alzheimer's disease is a sickness that afflicts over 5 million Americans. In fact, statistics show that every 66 seconds someone in the United States develops the disease.

Unfortunately, this trend appears that it will only get worse over the coming decades.

Recent studies have shown that Alzheimer's disease diagnoses will triple by the year 2050.

This announcement has left researchers scrambling for an effective treatment.

Surprising to some, a new study has revealed that marijuana might unlock the key to health and longevity for Alzheimer's sufferers of the future.

Beta-amyloid has long been suspected as a trigger of Alzheimer's disease due to the way the protein clumps in the brain of people with the disease, forming plaque blockages.

These plaques disrupt communication between neurons in the brain which causes the hallmark symptoms of Alzheimer's including memory loss and mood swings.

Well, research published in the Journal of Aging and Mechanisms of Disease has revealed that a compound found in marijuana has effectively triggered the removal of beta-amyloid proteins from neurons and nerve cells.

The discovery was made by Professor David Schubert and colleagues at Salk Institute for Biological Studies in La Jolla, Ca.

Where things got interesting is when they found that THC-like compounds produced by nerve cells might actually be protecting the cells from dying.

Which lead them to the question: "Can THC prevent nerve cell death?"

They tested this theory by applying THC to nerve cells with high beta-amyloid production.

The results showed that the THC, in fact, did reduce beta-amyloid levels and halted nerve cell death.

Of course, more clinical trials are needed to test this theory further, but the researchers are excited about their findings and believe it could pave the way for new Alzheimer'﻿﻿s ﻿﻿treatments.​