Can Cannabis Help with PTSD Symptoms?

Post-Traumatic Stress Disorder (PTSD) is a huge issue in today’s society. In the United States, a resounding 7.8% of the population will experience PTSD symptoms at some point in their lives. With the rate of PTSD victims slowly increasing, researchers are starting to become more open to the idea of using cannabis as an alternative treatment to help with the symptoms of PTSD. 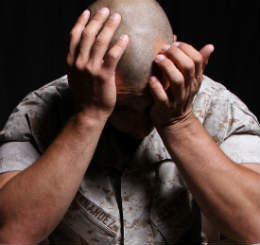 A﻿﻿ccording to﻿﻿ the U.S. Department of Ve﻿teran’s Affairs, Post-Traumatic Stress Disorder is a mental illness that is developed after experiencing a traumatic event.

The main symptoms of PTSD are reliving the event, avoiding situations that remind you of the event, having more negative feelings and emotions than usual, and hyperarousal. PTSD occurs when patients respond to stimuli that remind them of a traumatic event well after that event is over.

How Can Cannabis Help with This?

​Researchers have found that Marijuana has the potential to help patients reduce their association with the stimuli and past traumatic events. Reducing this association could help relieve negative symptoms of PTSD such as panic attacks or depressive episodes. In fact, many people find that therapeutic cannabis significantly increases the quality of life in people who suffer from PTSD by relieving the associated symptoms.

That being said, relieving the symptoms of PTSD is only part of the solution. Treating each individual symptom of an illness alleviates the symptoms, but not the illness. Researchers are working to find a treatment for the entirety of PTSD. They are looking into how Cannabis can relate to memory extinction to reduce the negative connotations with stimuli and past memories.

​Memory extinction is a regularly occurring process where the brain removes associations from stimuli. It’s the process of “unlearning” how someone responds to something happening. In PTSD, the response to the stimulus might be panic, fear, or flashbacks.

Dr. Raphael Mechoulam, a highly-respected neuroscientist who focuses on cannabis and the brain discovered that the cannabinoid system is strongly related to memory and memory extinction in particular. Using this correlation, many researchers are looking into studying how using Marijuana alongside other cognitive psychological therapies can fully treat PTSD.​

In the meantime, if you want to use t﻿﻿herapeutic cannabis to help with PTSD symptoms, Dr. Raphael Mechoulam suggests taking low to moderate doses orally with as stable of a blood level as possible for anxiety/depression relief. To aid in response from PTSD triggers, taking small to moderate doses through cannabis vapors just before exposure to the trigger should help.​

While more research is happening on the correlation between memory extinction and other treatments, it is still very hard for researchers in the United States to get any sort of experimentation on the helpful effects of cannabis.

Cannabis is still considered a Schedule I drug, which means that there are “no currently accepted medical use[s] in the United States, a lack of accepted safety for use under medical supervision, and a high potential for abuse.” Moving cannabis out of this classification would allow researchers to study the uses of medical marijuana more freely and affectively.​