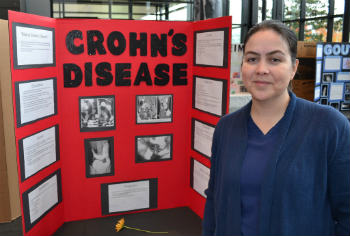 Many chronic illnesses and painful diseases are listed as valid reasons for gaining the right to use medical marijuana as a mechanism for relief from the symptoms affected people experience on a daily basis. Crohn's ﻿﻿disease is one of these accepted diseases.

​A recent study used 21 people suffering from severe, intractable Crohn's disease to test if smoking marijuana, specifically 'Cannabis Sativa,' had any affect on their symptoms. Of the 21 participants, 11 were given active marijuana cigarettes to smoke twice a day. The other ten participants were given a placebo cigarette. The individuals were not told who had active marijuana and who had been given placebos.

​In the group which received real marijuana cigarettes, almost 50% of the 11 participants (five of the 11) experienced not only a reduction in their symptoms but complete remission of the disease. However, the group who received placebo cigarettes also experienced a similar result, where four of the ten felt their symptoms were diminishing. In Crohn's disease, symptoms have been known to do this on its own, and the reactions experienced by the group receiving placebo cigarettes may have been part of the natural flow of the disease.

Another benefit shown by the group receiving real marijuana cigarettes is the increase in positive and normal life activities. The ability to sleep through the night without being disturbed by the need to visit the bathroom enhanced individuals' ability to be more rested during the day, which most likely decreased their overall stress levels. One other benefit was an increase in their appetites and ability to eat more nutritious food.

One problem with this study exists, in that the study's literature did not explain how the placebo cigarettes mimicked the flavor and scent of the marijuana cigarettes. More study is needed into the benefits of medical marijuana regarding Crohn's disease and those who suffer from it but current results seem to be very promising that marijuana could provide more relief than currently prescribed medicines are capable of providing and without the addictive qualities of current medications.

Researchers were concerned about the mode that individuals needed to use in order to obtain the marijuana's beneficial effects, and believe that an extract may be more beneficial than smoking in the traditional way. The abdominal pain experienced as one of the symptoms of Crohn's disease may be aggravated by the act of smoking itself. An encapsulated form may be much more beneficial for many Crohn's disease sufferers.