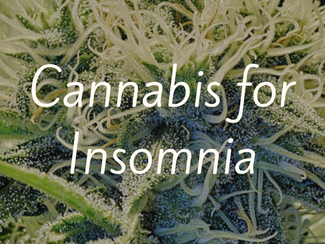 Medical marijuana can be used to treat a wide variety of sleeping disorders, some of which include insomnia, sleep apnea, narcolepsy, restless leg syndrome and parasomnias. When traditional sleep therapy methods fail, should the individual turn to medical cannabis for sleep treatment?

Cannabis has been found to improve the length and the quality of sleep in individuals. THC, or tetrahydrocannabinol is a major component in marijuana which helps shorten the time needed for people to fall asleep. When administered via oral doses, patients suffering from insomnia were able to fall asleep much faster as compared to those who didn't take THC. Acute administration of THC had the same results- patients had a longer stage 4 sleep than non-users.

Medical cannabis helped in allowing the patient to sleep for longer periods without significant awakenings and interruptions. In an animal trial, a synthetic compound similar to that of THC was able to attenuate serotonin-induced apnea via relaxing the muscles in the tongue and chin area. In the same vein, military personnel who were experiencing PTSD and nightmares found themselves able to sleep quicker and better when taking in cannabinoids.

A combination of THC and other cannabinoid components, most notably CBD has shown remarkable results in combating sleep disorders. Acute CBD treatments had a positive effect in that it increased the individual's total sleep time.

There were times when CBD was found to have a stimulating effect in people. In some cases, CBD increased wakefulness during times when it was consumed with the lights on. A dose of cannabis that's high in CBD content could potentially treat excessive daytime lethargy and manage sleep deprivation.

Cannabis consumers often take to medical dispensaries to purchase marijuana because they're experiencing sleeping disorders. Nearly half of adults who bought medical cannabis claimed that it helped them manage the effects of insomnia. These users preferred strains that had higher concentrations of CBD for a more potent sleeping disorder treatment.​