How is Medical Cannabis Better Than Traditional Treatment for Leukemia? 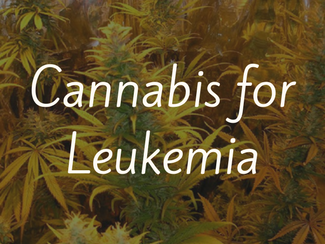 In 2009, a 14-year old girl and her family was told by doctors that her acute lymphoblastic leukemia was all but incurable. The girl had done the best possible treatment for the white blood cell cancer- radiation therapy, aggressive chemo and a bone marrow transplant, but it wasn't enough. In desperation, the parents decided to give CBD oil a shot and try and cure their precious daughter.

It was nothing short of a miracle. The girl's harmful blast cell count was reduced to no more than 2,000 (coming from 370,000) in a period of 78 days. The cannabis oil was working and it was clear that the dosage was part of the treatment's effectiveness.

The girl died due to complications in the chemotherapy process. But the thing that stood out was that it was possible to treat advanced stages of cancer with marijuana, more particularly cannabis oil. The article was published in the scientific journal called Oncology Case Reports in 2013.

Authors noted how the chemotherapeutic treatment had failed in lowering the blast counts and induced deadly side effects that led to the patient's demise, and how the CBD oil had zero side effects and increased the girl's vitality. In a side note, the authors revealed how further CBD research may lead to breakthroughs in the medical industry regarding marijuana and its profound effect on deadly diseases.

The six chosen compounds had a powerful effect against leukemia cancer cells. Researchers noted that the healing effect was amplified when all the compounds were used together. Dr. Wai Lu, the lead researcher is optimistic that marijuana will soon be a viable and legal form of cancer treatment in the future.